The last week began quite busy, with a whole lot of hustling. Which is not necessarily a bad thing, don’t get me wrong. When Wale’s holiday program was about to start on Monday, the kids joined us much earlier, at 2pm already. Which meant that we had limited time during office hours to keep on going with our usual administrative tasks as well as with preparing all the classes that were about to be on the upcoming program.

We introduced the week by beads-making, which took me a whole lot of patience. I really enjoyed the calmness though, looking into the super concentrated faces of each of the kids. Afterward, Venna organised a little acting workshop on emotions, which made us laugh so much. And a bit hyper active to be honest. Step by step, everyone learnt to be more open, to express themselves and to be less embarrassed meanwhile. On Tuesday, Evette and Happiness were designing some new costume ideas with our little and big dancers, preparing for the forthcoming show at The Junction Mall. Afterwards, I organised a computer trivia to teach basic computer use, but more importantly internet use and research skills. Ranging from Google up to Wikipedia. In team work, the kids competed among themselves, tried to find the right information online and answered question over question. “What is the population size of Kenya?”, “What is the distance from Kibera to Nairobi city center?” or “How do you use google maps?” amongst others. At least, now they have learnt what the Schwebebahn (suspension railway) in my German home town Wuppertal is. The winning groups attained some Mandazi and KDF (both Kenyan pastries as another version of donuts, with the latter standing for Kenya Defence Forces). The next computer class to be followed will be all about e-mails. With all that, I hope to prepare the kids with life skills for their future, teaching them not only responsible computer skills but also research and problem-solving skills. Above all, I try my best to contribute to their access to information and expose the kids to new perspectives, both locally and globally. 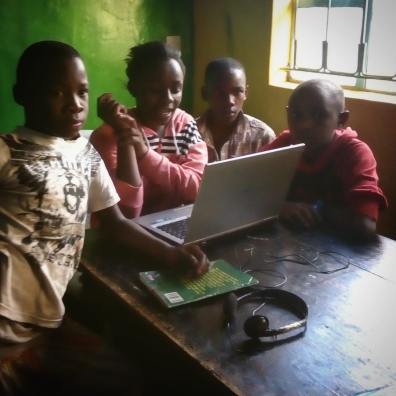 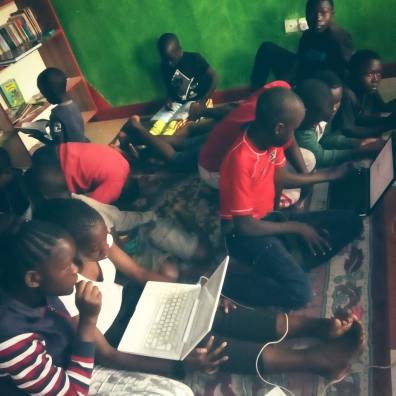 On Wednesday, Evette taught the kids some fun facts about Uganda, while Happiness was responsible for an English lesson. In the evening everyone watched the film Incredible Me together. Continuing the week, Venna organised a career class on “what you have to think about when you think about your career” with the older kids on Thursday, while I prepared  an inter-active class on dreams, goals and motivations for the younger kids. I tried to inform them inter-actively about goal-setting, about what dreams are and about how everyone should try to reach their wildest dreams step-by-step. I tried to show that we should believe in ourselves, follow our passions deep-inside. I know it sounds cheesy, but it’s very true. Especially when it comes to kids that do not really grew up believing in themselves, do not really believe in a way out of poverty, feeling the daily reality of hopelessness. A lot of kids dream to be doctors or lawyers, just because it sounds fancy. Though, they do not actually believe in themselves ever becoming those doctors or lawyers they are talking about. Hidden behind those make-up dreams are often interests, curiosities, passions and talents they haven’t discovered yet or even thought about. During the class, we watched videos of some incredible kids achieving world records with their very own stories. Or we watched wiggle tales, a story about the Rabbit Howard always trying his best at whatever he likes the most, dancing in this case. I thought that would fit perfectly, considering all the little and big dancers visit the center day to day. After all, everyone was asked to draw themselves imagining they would be 30 years old. Here are some of the results: 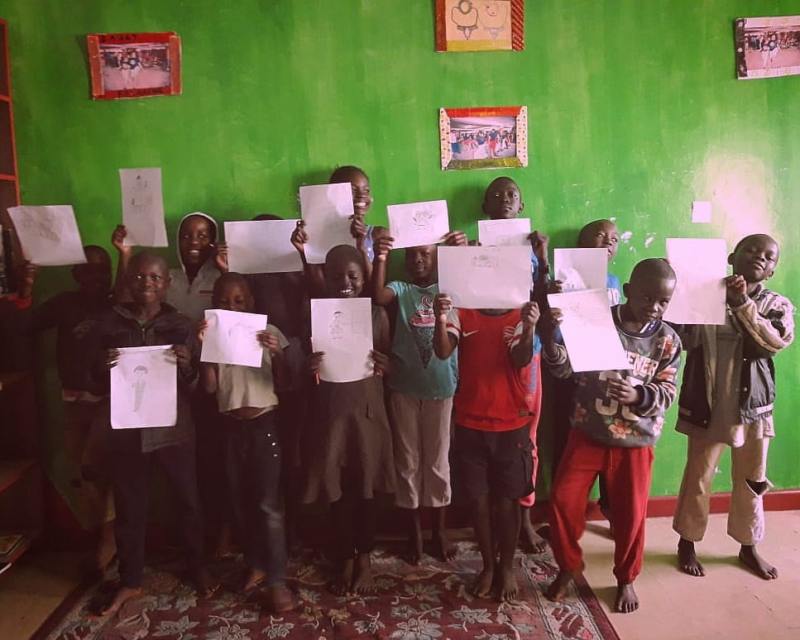 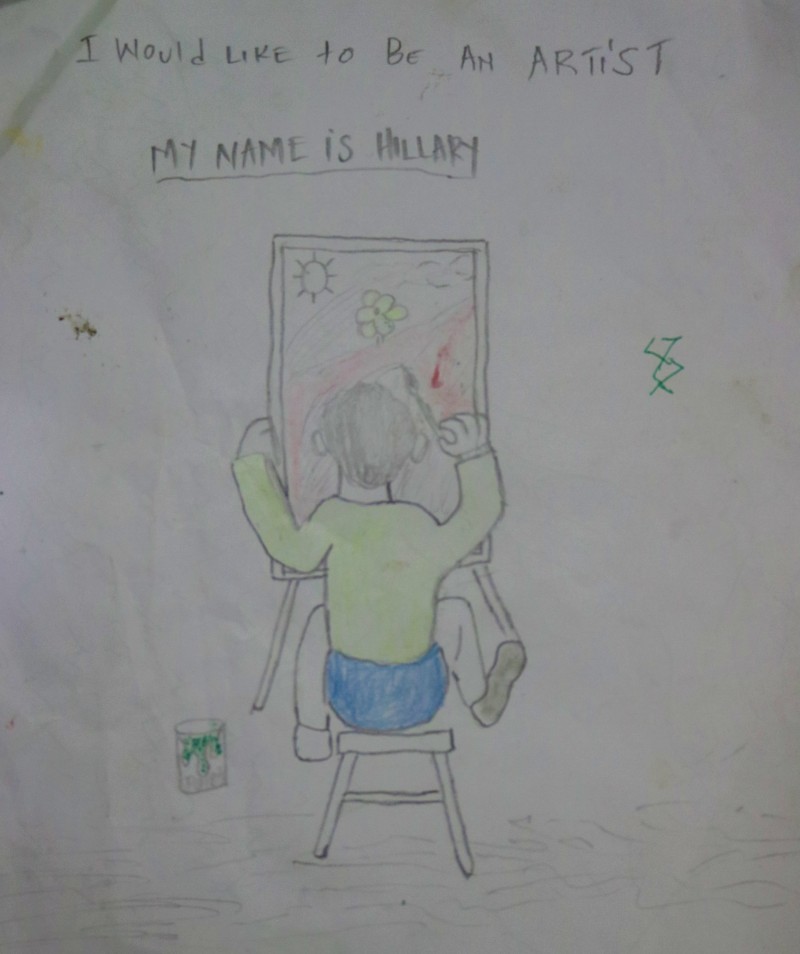 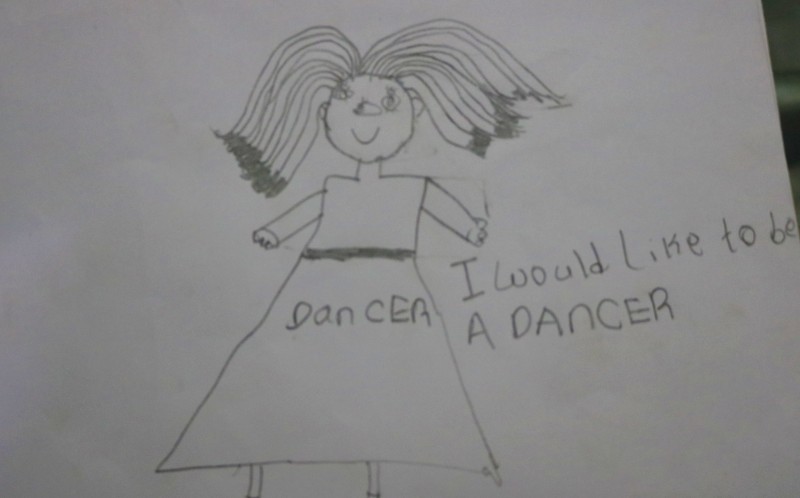 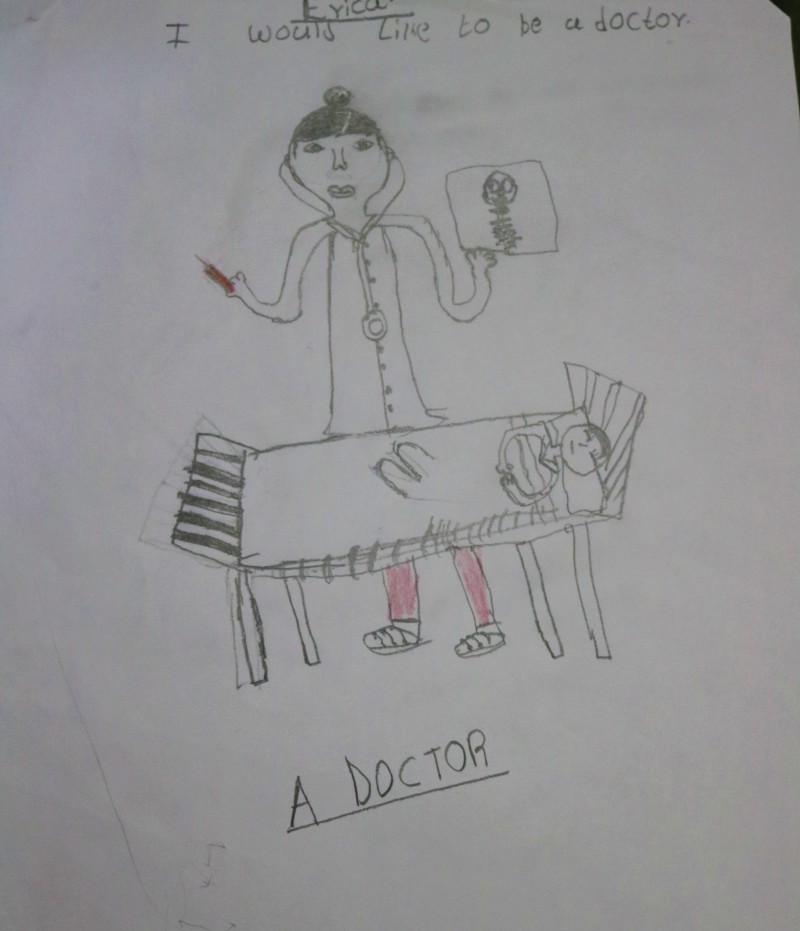 On Thursday evening, the kids practiced three traditional dances for the soonish show at The Junction Mall. I enjoyed both, joining them during the dance warming up and simply watching them singing and dancing “Karibuni Kenya”. 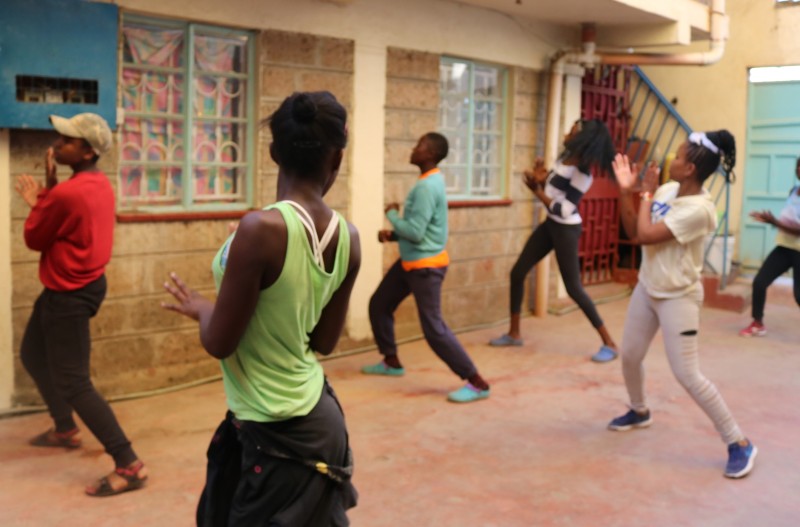 In the evening, Venna took me to another soul performance, this time by artist SAGE, at J’s in Nairobi. SAGE really impressed me with her voice. On Friday the day started with a shopping tour together with Venna and two of the older youth Claire and Mary. We drove to Eastleigh, Nairobi’s Somali corner, to buy some Swahili fabric and sewing material. Currently, Claire and Mary are in their last years of high school for which reason their will learn more about future opportunities in fashion and photography. With the fabric we bought, they are going to create their own little projects, teaching themselves designing skills. In the afternoon, I supported Venna in her photography class, teaching basic rules of composition as well as the role of light and exposure. Here, the kids were asked to go outside and discover the functions of the camera by themselves. 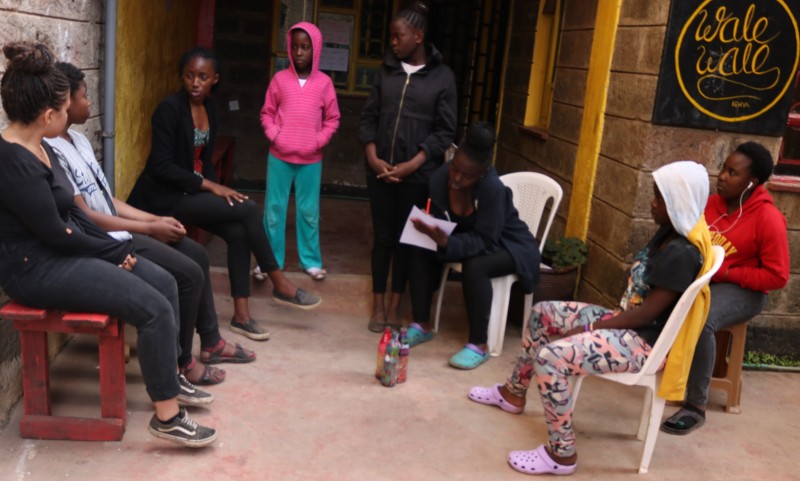 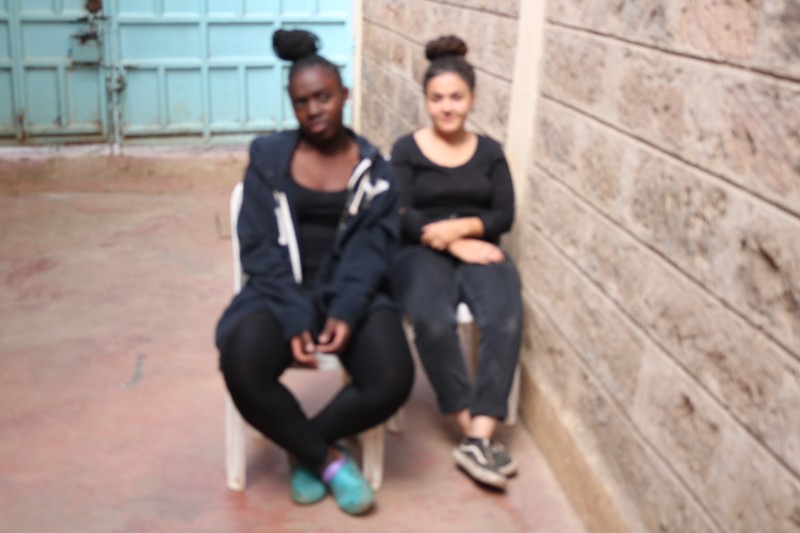 The Saturday program took place as usual, although I was a bit late being stuck in traffic for almost three hours after my yoga class at the Shine center of Africa Yoga Project. In the evening, Venna, Evette, Happiness and also Claire and Mary joined for a sleepover. The next day, on Sunday we had a pancake brunch with some Sunday morning music. Afterwards, we invited some of the other girls to our place. Together we talked about some of the arising questions when it comes to girlhood … 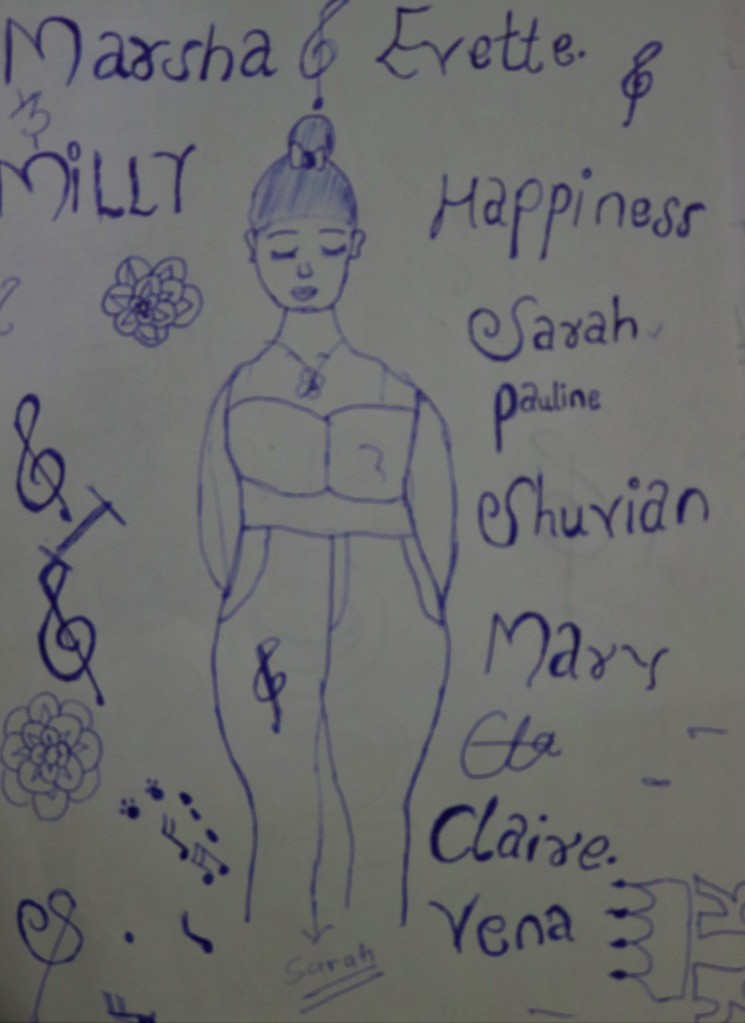 Often these girls are left alone, their parents or schools miss out to inform them about “girls stuff”. It is not uncommon if they do not get any information on puberty, social and cultural expectations society places onto girls, the meaning of beauty, love and relationships, sex and sexuality, sexual health amongst others. With Venna, Happiness and Evette we tried to create a confidential and safe space, wherein the girls could ask every question that would come up to their minds. The girls were writing their questions and personal responses in letters anonymously. As I am a bit more of an outsider, I was chosen to read out the letters. Through a more personal talk, we tried to give them confidence. We tried to make them believe that they should be who they are. As well as to only do what they feel like. Besides of all the pressure from outside. A lot of girls grow up with the perception of marriage and motherhood being the only desired roles of womanhood. With the perception of girls being supposed to play the stereotypical caring, supportive, pleasing, cooking and cleaning, offering and above all loving yet innocent, maybe even opinion-less role. Not to forget the expectations people speak out about beauty and girls’ appearance. Obviously, those are just a few out of, well, maybe even a textbook of expectations. Not to deny that boys have to face a number of expectations too. We tried to teach the girl to get to know and discover who they are, who they want to be. We tried to let them know that it is okay to pursue their own personal wants of whatever, as much as it is okay to pursue marriage and motherhood. The only expectation they should fulfill is the one they have towards themselves, being honest with themselves. Just doing their thing. Owning it. No matter what. Their own perspectives, opinions, attitudes, desires and what not come first. Always. Thus, we tried to make them aware of how important it is to get to know themselves, to form their own identity. At the same time, that means that not always knowing yourself while figuring out your identity is part of growing up. And that it all takes a while. Other than that, we tried to teach them to communicate, to not be left alone with their questions and perhaps even troubles as well as to not be ashamed of those. We tried to make them aware of their own voices and their own agency. And to make decisions consciously, deliberate and with consent. To loosen up the atmosphere and to not create a too serious and awkward setting, we also created a more entertaining program around all that. We had lunch together, played some card games and danced a tiny bit. Afterwards, everyone posed in front of the camera, while Venna and others were taking some photos. Again, this contributed to Claire’s and Mary’s project in photography and fashion. Of course, at the same time it helped everyone to be more open and express themselves freely.

In the end of the day, I felt like I learnt a lot from the girls. The whole week was a week filled with new experiences, teaching and learning together. As much as I tried to teach them computer skills or dreams, goals and motivation or about “girls stuff”, as much did I learn from them. By trying to understand their perspectives and realities. I am sure that those shared experience will shape my way of thinking, also in future. I am thankful for every bit of moment here. So far, I somehow feel that I finally arrived in Nairobi and I am part of WaleWale for now. I got to know more and more kids and fortunately or unfortunately I really got attached to a bunch of them. Also, closely working together with Venna, Evette and Happiness makes me feel I am working at the right place. I really do enjoy my time at the center in all aspects. And I don’t even want to think about leaving soon. Although I am already excited about the next few days, I somehow don’t want to continue and see it ending.